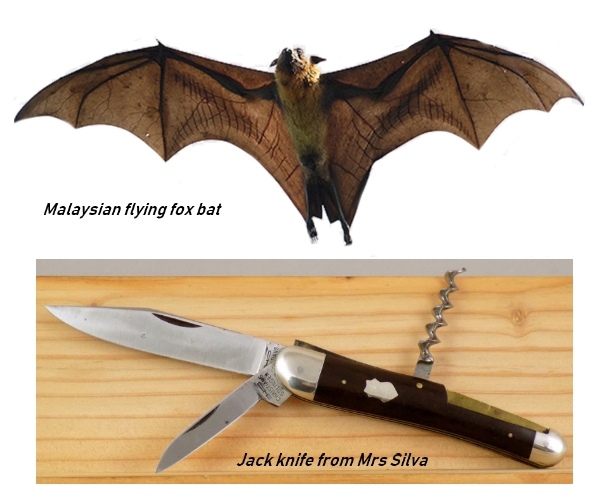 Let me begin by saying I think there are three categories of life events:

Many folks recall clearly, for example, when President Kennedy was shot, and Martin Luther King’s “I have a Dream” speech.  Unique events, and shared by many.

Common shared life events can bring us closer together: graduations, marriages, the births of our children.  Common themes and similar stories are plentiful.

Sometimes events we think are rare are not.

Driving down Biltmore Avenue while eating a marbled rye sandwich of dodo bird meat and six-day-old Chinese mustard, and finding a parking spot right in front of the Orange Peel may actually have happened to someone before.  (Well,   maybe not finding the parking spot thing.)

Now, for my unique story about being bitten by a Malaysian flying fox bat.

No?   Not the kind of story you want to hear?

Fine,    here’s another story.  After Christmas when I was about seven years old, my grandmother made me write thank you notes for all the gifts I’d received from her friends.

The other story is better anyway…

Fast forward thirty-six years.  We received two reports of what might be specimens of a long believed extinct species found on a beach on one of the Little Nicobar Islands west of Malaysia in the Indian Ocean.  The photographs of two of the carcasses showed large wingless birds with heavy curved upper mandibles.that may have been used for crushing shellfish.

No current species fit the description.   Only our research group and and a French group working in the Mauritius Islands had been notified.  The race was on to get an authorized budget and to arrange for a 3-to-4 week field trip.

Packed, excited and on our way, we landed 36 hours later in Kuala Lumpur and slept for almost a day as our body clocks tried to reset for the new longitude.  A local travel agent was able to book us on a two-hop trip east to Banda Aceh across the Malacca Strait where we were able to squeeze onto a Sumatran mail and supply sea cruiser to the Nicobar Islands.  After a two day trip we finally joined the French research team already there. They were camped in the highlands about 3 kilometers from the beach and happy to share some of our Kentucky bourbon.

Their English was much better than our high school French.

About dusk, while pouring over our notes and photos,and sipping our bourbon, and some cheap French wine, we heard a strange high pitched barking.

“Big bats. Zey eat mostly fruit and berries, but sometimes zey are attracted to zee sound of our voices.”

Out of the darkness I heard and then felt wings flapping.  Suddenly, there was a small, winged, puppy-sized animal on my shoulder.  Was it trying to eat my ear? I screamed.

Only my jack knife with the corkscrew was handy,  I slashed where I thought it was.  It was gone.  I only had scratches and now, a good story to tell.

After 11 more days of searching for the surviving dodo’s, we gave up.