This morning I awoke to an odd noise, downstairs – little clicks and a high pitched “yeeeeh, yech, yeeeeh…”  Something, an animal, was in my house.  I went downstairs and turned on all the lights.  I looked under the couch and chairs, under the bed in the guest room, behind the big chair in the library.  The door to the lower level was shut so, I didn’t go down there.  Nothing.  My imagination?

I returned upstairs for my morning ritual of shower, shave, select my outfit.  Yesterday’s pants and shirt will be fine.   Still, my mind was on my intruder, where was it hiding?

I went downstairs, made a pot of coffee, fixed a bowl of dry cereal with a sliced banana and turned on my laptop for the news and mail.  My attention drifted.  Then, I heard a little shuffle and saw a quick shadow.  I really did have a visitor.  Now, to action!  CAPTURE & CONTAIN!  I’ll need to be a little creative here.  How about a stick (a bamboo shaft) and my fish net?  Yeah, that should work.  The cardboard box for my Wii system should do for a container, temporarily.  In less than a minute I had collected my tools.

It was there under my old tea cart of all places, looking out.  At first, all I saw were the two shiny black eyes. Then I could see the long face and round ears.  A weasel?  A young martin?  I remembered from my trapping days as a youth, there are few animals as fearless and aggressive as a weasel, vicious in fact.  In an instant he ran past the hand net when I poked it from behind – so fast.  But there was nowhere to go or hide.  I cornered it in front of my pots cabinet and got the hand net over most of his nine inch body.  Adrenaline, whoa.  I could see a long tail which was whipping frantically.  Its body was dark with a white chest, it looked more frightened than mad.

I knew it could bite, so I kept my hands out of range.  The hand net was deep enough so it couldn’t jump out as I flipped it over into the Wii box.  The top flaps closed and I put a heavy pot on top.  Done.  It was making a lot of noise inside, but it was contained.

I plopped down in my bentwood rocker to collect myself.  That was exciting, even fun, but now what?

I figured I had three, maybe four options: let it go free outside in the nearby woods, keep it as a pet, or kill it and eat it. Or, maybe I could give it to the Nature Center on the other side of town.

Thinking, I decided to take a stroll around the neighborhood.  Walks can be a good time to figure out what to do.

While I thought about all this, maybe I ought to see if I could learn exactly what kind of critter it was. Wikipedia to the rescue. Is Asheville too far south for a Martin? Maybe. There it was – my first guess, a Yellow-breasted Martin, or Pine Weasel. They’re omnivores that eat mostly squirrels and mice and birds and some fruit. So far so good. They are rare and even endangered in Wisconsin . Well, this is North Carolina , so my environmental pals are out of luck. Option 3 is looking good.

The big problem with eating the weasel was not how to cook it. I knew exactly how I’d do that. The darn thing was alive, not skinned and dressed on crushed ice at the market. There could be no suffering. Besides this story is rated G, so this part is very important.

We never talk about all the meat we eat, how the animals die, only how delicious it tastes. I’m pretty sure none of those animals want to die and that, in the interests of efficiency, it’s all very disturbing and violent, but well hidden. Animals don’t have a voice, just our consciences.

So, I’ve decided not to tell you about that part and move on to the cooking. I used my old Appalachian recipe for squirrel stew. I browned the meat in olive oil, onions and garlic and then added some vegetable stock and red wine, carrots, potatoes and celery and some red pepper flakes and rosemary. It simmered in a covered pot for 2 hours. Then, I thickened the stock with some arrowroot. Martin stew was served, delicious.

After my meal, I had a nice hot cup of Jasmine tea.

Well, that could be the end, if I didn’t tell you what I saw on that walk.

I hadn’t walked far.  There was a poster on a telephone pole.  I stopped to read. 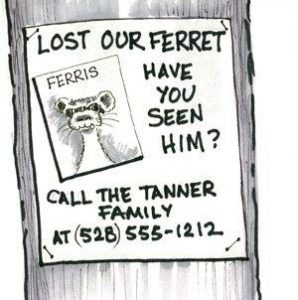 Oh my. This changes everything.  The address was close by.  I turned around and quickly walked back to my home to think.

My visitor was still safely in the Wii box.  I used some twine to hold the flaps securely and with the box under my arm proceeded to the Tanner home two blocks away.

I rang the bell.  A young girl opened the door.

“You tell me,” I replied, pulling off the twine.

The family quickly gathered at the front door.  Cameron, a handsome teenager, spoke.  “May I have him, please?”  He was very polite.

Cameron took the box and ran upstairs.  Connie, the mother, introduced everyone and invited me in.  “Would you like some tea?”

I knew it would be instant and iced.  I said, “No thanks.  I found him this morning in my house.  Glad to provide a happy ending.”

“So where did you find the Wii?”  Mr. Tanner persisted.

“At Target, Why don’t you come over and try it out sometime?”

I said my goodbyes and headed home for a glass of box wine and some vegetarian pasta.

Note,  Wikipedia is no substitute for common sense.  I should have looked up the Black Faced Ferrets.  Also, never forget that I have a very active imagination and often I’m “Just Kidding.”