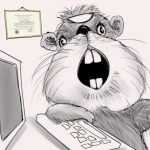 This is my first journal post (and maybe my last).  Although this is an inter-species social network, few of you know about us. We are lemmings, a beautiful arctic rodent (so called by the surface sapiens).  We live in well-regulated, solar-powered warrens beneath the arctic snow.  Our society is advanced, complex and civil.  We eat moss, and our only enemies are arctic foxes and snowy owls; so it’s a bad idea to go out at night.  We love mating and large families.  We don’t cause any trouble.

My brother Lars and I are the only children remaining of our family of six older brothers and three sisters. While they were in high school our older siblings left to join a Greenpeace protest march in Oslo. They never came back. The periodic disappearance of large numbers of our community are well known but not particularly understood.  My theory is lack of food.

Last year, I was accepted at the University of Tromso and studied accounting and later actuarial and statistical mathematics. I’ve now graduated and passed the actuarial exam and was admitted to the Lemming Institute of Actuaries.

As an actuary, I have access to all the mortuary tables and can easily see a saw-tooth pattern where our population grows rapidly and then falls suddenly.  The life insurance companies are eager for our predictions and pay well.

All my life I’ve hated the sickening cliché-like jokes about the preposterous notion and myth of our mass suicides.  Endless cartoons and comic-page references to herds of us blindly running over cliffs only to perish in a cold arctic sea. 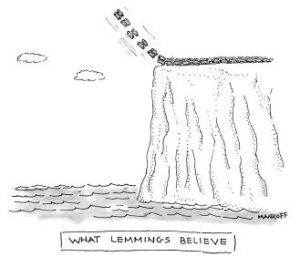 Using YouTube, I’ve discovered that it all began with a Walt Disney nature film called White Wilderness.  Filmmakers staged the death scenes.  We see what appears to be a horde of us jumping into the Arctic Sea. The movie was filmed in the Canadian province of Alberta, which is not even our native habitat. The filmmakers imported a few dozen union lemming actors to Alberta.

They were cleverly made to look like a much larger number by placing them on turntables to create a frenzied migration effect and then herding them off a cliff and into the water.  Some individuals were actually harmed in the filming and are suing Disney.  What was depicted on screen was a complete fabrication and has been the basis of our ridicule by sapien cartoonists in the New Yorker and newspaper comic pages ever since.

It is hopeless, IMO, to set the record straight.  What’s needed is revenge.

I’ve posted all this information on Snoutbook.   I have 34,627 SB friends and had a big idea.   I sent a proposal to the leading vacation tour companies to add a side trip on their Scandinavian itineraries.  Plein air artists, photographers and cartoonists could witness LIVE our actual mindless herd suicides at a scenic icy cliff overlooking the Norwegian Sea.  Shuttle buses, refreshments and guides would all be provided.

Two tour companies, Globus and Trafalgar signed up.  Six tours of ten persons each were booked.  Using local students and unemployed musicians we rehearsed the performances and the use of our cleverly camouflaged safety nets.  Our actors enjoyed the ruse and being outside.  They were protected from the foxes and owls by drones on loan from Greenpeace.  Slick.

After all the bills, taxes and commissions were paid, I netted exactly 1258 Kroner.  Not bad for a lemming, eh? My only regret is that neither Stephan Pastis nor Bob Mankoff (cartoonists who have tastelessly enriched themselves at our expense) bothered to attend.

Leifmealone.  ZZZZZZZZ…  What a bore.  Go jump off a cliff.