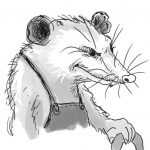 John and Paula Opossum live in a crawl space underneath a student cottage in Montford.  The “O” is silent because years ago when Pangaea was breaking apart to form continents, their marsupial ancestors wanted to follow their cousins the O’tters and the O’striches to live in Ireland.  But they only got as far as Alabama where they became road kill and their neighbors just called them the “Possums”.   They kept the “O” because they still dream of getting to Ireland one day.

Life is easier now that John and Paula are both retired.  They live on crickets and acorns and Chipotle scraps the students throw away.  They don’t party as much anymore, and they’ve started taking classes at the Old Lemurs and Lizards Institute nearby.  Three nights a week they follow the brook up the big hill and take classes on history, hanging by your tail yoga, old music and playing dead. During breaks they chat about how the kids never call.

One evening John felt the urge to go down to the brook and see what was going on.  After dark a lot of his pals came out.  Paula issued her perfunctory warning about foxes, bears and queen snakes that he barely heard as he scurried out.  It was a clear night with a bright half-moon, fireflies swarming and tree frogs croaking.  The woods at the edge of Montford were alive. 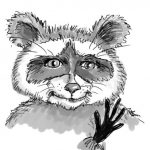 In the brook he saw his pal Murray, a raccoon, on a rock staring into a shallow pool, his tail twitching.

“Shhhh,” said Murray.  “There’s some nice young bass right down there.  I’m gonna get one.”

“They’re way too fast for you,” said John.

Splash.  Not even close. Murray came up empty pawed and very wet.

John laughed and some bats squeaked overhead.  The fireflies scattered, turning off their tail lights.  In the moonlight they saw a great buck drinking warily only pausing to sniff for danger.  Then suddenly he bolted and disappeared into the dark forest.

A pack of hungry tattooed hillbilly coyotes were sneaking up.  Noses close to the ground and tails low and stiff.  “Fresh possum and coon will taste good tonight, eh boys?”

Up into a nearby chestnut oak they scampered alerting a family of squirrels and a pileated woodpecker who was trying to nap.  The coyotes circled the tree, looked up and whined.

“Billy Joe?  You forgot the durn ladder didn’t you?”

The pack was still all sitting around that tree when dawn came.

After a little branch hopping, Murray was back in Montford checking pet dishes left out on porches and John was telling Paula about his great time, minus the coyotes.

“And no queen snakes,” he said.

“I found a tour of Ireland pamphlet…” Paula answered.